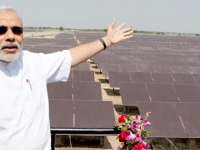 Why the global climate hinges on India’s solar revolution

If India were to grow its electricity system based on coal (as China has done), would it derail the global climate?

Indiaï¿½s Power Minister, Piyush Goyal, has made it clear on a number of occasions that India plans to significantly ramp up its coal-fired power plant capacity in addition to renewables. The country has no other choice, he argues, in order to generate the vast amounts of power the country needs. In January 2015, India had a total installed capacity of 259GW, of which 156GW, orÂ 60%, was coal. Due to an above average plant load factor, coal contributed 67% to the electricity generation, according to theÂ World Bank. Will India stay on the same track, or will it be able to fundamentally change its energy mix?

Bridge to India has modelled Indiaï¿½s power requirements and associated emissions and compared a ï¿½coal-heavyï¿½ scenario with a ï¿½solar-heavyï¿½ scenario. Why solar? Because, if you look at the available energy options, it is the only alternative that can potentially supply the bulk of the energy needed.

In our model, we assume that Indiaï¿½s power requirement grows fast, by an average 7% per annum. This is roughly in line with past growth rates and is lower than the growth we have seen in China in the past twenty years. In India, this would mean that by 2035, annual power generation would increase by a factor of 5 from the current ca. 1,000TWh to around 5,000TWh.

Such a growth rate takes into account that Indiaï¿½s population will grow, that it will industrialise in order to provide the levels of employment needed (this increases the energy intensity of the economy), and that there will be step changes in consumption patterns as the population becomes more well off (e.g. more cooling). We also assume that India will close its current grid power deficit and find a way to providing electricity to those 300-400 million who are currently un- or severely underserved.

On the other side, there will be improvements in the efficiency of power generation, transmission and consumption. Indiaï¿½s grid, for instance, could reduce distribution losses from the current 20% or more to international best practices of around 5%. Better urban planning and more energy efficient architecture can also go a long way in keeping a lid on growing power demand. An effect we did not take into consideration, because it is difficult to quantify, but that is nevertheless likely, is an increasing electrification of the energy system: away from traditional biomass and oil, towards solutions such as electric heating and mobility. Of course, if India fails to develop, which would be a terrible tragedy for one-sixth of the global population, the growth in power demand will be less.

How can this vastly increased power requirement be generated? According to our calculations, under a ï¿½coal-heavyï¿½ scenario, India would increase its coal-fired power generation capacity from the 156GW in early 2015 to 677GW in 2035. Solar would still grow at 20% per annum to a sizable 153GW, but contribute only around 6% to Indiaï¿½s power requirements in 2030.

The alternative scenario is ï¿½solar-heavyï¿½. Here, India builds new solar plants at a growth rate of 35% per year over the next 20 years. It would then have 18GW by 2020 (against the governmentï¿½s target of 100GW) and more than 1,600GW by 2035. This is not a precise roadmap, since the details of such a ramp-up depend on political decisions. It is simply a uniform, assumed growth trajectory. However, it will make a lot of sense to build the bulk of the solar capacity later in the period when solar will presumably have become much cheaper still. For the same reason, this scenario also foresees new coal plants (as a bridge technology) to the tune of 94GW.