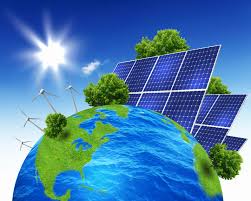 Solar Is the Fastest-Growing Energy

The world’s growing fleet of solar panels generated a third more electricity in 2015 than a year earlier, making power captured from the sun the world’s fastest growing source of energy.Solar generation grew 33 percent, with China overtaking the U.S. and Germany as world leader. Its 65th annual statistical review into world energy published on 2016. The London-based oil company exited from solar in 2011 after 40 years in the business.

“Sharp cost reductions have gone hand-in-hand with rapid growth in renewable energy. Solar power production has increased more than 60-fold in 10 years, doubling capacity every 20 months,” said Spencer Dale,  chief economist, in a speech that also predicted continued falls in the costs of solar.The growth in renewables means the industry now accounts for 2.8 percent of global energy use, up from 0.8 percent a decade ago, . In total, renewables added 213 terawatt-hours of wind, solar and biofuel capacity last year, which was about the same as the total increase in global power generation.