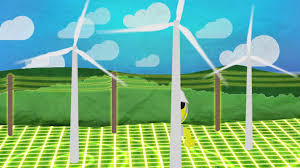 Wind energy is a key part of the global energy future, expanding rapidly throughout the world in onshore and offshore settings. But to be sustainable, large scale, multi-megawatt (multi-MW) wind farming's economic efficiencies need to be maximized and knowing where to place the turbines within the wind farm is a first step.

Without proper and strategic placement of wind turbines, the low-speed wind behind turbines, called a wake, decreases the efficiency of the wind farm. Wind tunnel tests have been used to guide placement, but their conditions are not representative of the complex flow behaviors in the field conditions of actual wind farms. So the question is, how to overcome this?

Bring on the drones. Moreover, design novel instrumented drones with a suite of sensors capable of gathering precise field data in the complex flow and terrain of an actual wind farm.

This was the approach of researchers from Switzerland. Team members with the Swiss Federal Institute of Technology Zurich developed novel instrumented drones that made high-resolution measurements of wind speed, wind direction and turbulence encountered in actual wind farms. Results show detailed flow behaviors around the wind turbines, useful for developing simulation tools that can be used to optimize placement of wind turbines within the wind farms. This offers the turbines the most efficient use of the wind resource.

The researchers represent an interdisciplinary collaboration of hardware and software experts including aerodynamics, atmospheric flow physics, energy technology and materials science. They present their findings at the American Physical Society's Division of Fluid Dynamics annual meeting, Nov. 20-22, in Portland, Oregon.

In particular, the team is the first to develop and field test an instrumented drone used to measure, in detail, the airflow and mixing near and downwind of the wind farm. Chokani said, "These measurements shall accelerate the development of simulation tools that can be used to optimize the placement of wind turbines in onshore and offshore wind farms."

The key to the current work is a seven-sensor, fast-response, aerodynamic probe used to make the time-resolved wind measurements. The probe is based on measuring technology used in conventional power plants, which was developed over the past two decades at the Swiss Federal Institute of Technology Zurich.

Developing tools that can guide decision-making on where to place wind turbines for maximum effect is a desirable goal because through improved efficiencies, clean energy prices will come down and environmental impacts will be reduced. "This will substantially reduce CO2 emissions and the usage of water in the electricity generation sector, and further diversify the electrical energy mix," Chokani said.

The European Union's 2020 energy targets require 15 to 17 percent electricity from wind, up from 8 percent at end of 2013. In the U.S., energy goals for wind power call for wind supplying 10 percent of the nation's electrical demand in 2020.

Next, Chokani and his colleagues intend to extend the proof-of-concept established by their drone's measurements. They will use multiple instrumented drones flying in a swarm to make simultaneous measurements.