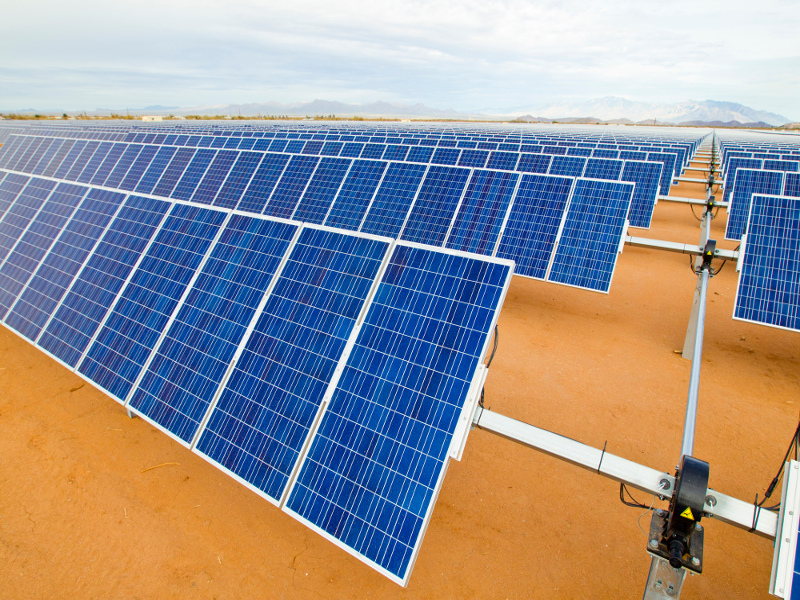 Every solar project presents an opportunity to solve challenges, mitigate risk and improve performance by choosing the right technology for the job. Though many in the industry argue in favor of one universally “best” solution for modules, inverters and mounting systems, the optimal technology often depends on project-specific goals and site conditions. Mounting system design in particular is sensitive to module type, string size, location, environment and geotech. Trackers are an excellent choice for a wide range of projects. Below we detail the benefits and drawbacks of centralized- and distributed-drive solar trackers today, and then we discuss how innovation will change tracker technology tomorrow.

The two tracker concepts dominating the market today use either distributed or centralized drives to move panels. While gigawatts of trackers have been installed successfully, history teaches us that it is necessary to continually assess the best technology for the application at hand and to constantly innovate to improve the options.

The benefits of standard drive components are obvious. First, manufacturers have had decades to refine the engineering and application of their products in harsh environments. The components are robust by design. Second, should there be a problem, parts and service technicians are available anywhere in the world.

Centralized trackers also tend to achieve the best land utilization in utility-scale sites that have regular borders, but have limitations when it comes to achieving density on sites with irregular borders.

Continued pressure on performance combined with increased volume and the rapidly declining cost of electronics inspired the introduction of distributed trackers. The concept of distributed systems is familiar to many products and industries. Within solar, there are micro, string and centralized inverters, which respectively are often used on residential, commercial and utility-scale PV. The modular nature of distributed design offers several important advantages when it comes to site flexibility and efficiency.

Distributed trackers move a single row or table of panels with each drive. For a solar PV plant of a given capacity, a distributed tracker will have tens or hundreds more drives (or independent units) than a centralized tracker.

As solar scales, we are seeing growing interest in developing solar on sites once considered too challenging, such as sites with irregular boundaries, 5 to 10% slope or rolling terrain, obstructions or unfavorable geotechnical conditions. When it comes to sites of this nature, distributed arrays yield better land utilization than centralized arrays. Furthermore, irregular sites are often on the smaller end of the utility-scale range (1 to 20 MW) and can be efficiently constructed by pairing distributed trackers with string inverters.

When it comes to efficiency, distributed trackers have the advantage of being self-sufficient, without a need for auxiliary power and communication wiring. Eliminating this wiring and the associated interfaces and customization reduces project engineering time and enables projects to be designed and delivered faster. Furthermore, layout changes are simpler to manage because each tracker is an independent unit. With a centralized tracker, modifying one row can have a ripple effect through the entire tracker.

The specific energy gain trackers offer over fixed tilt is significant, but sometimes a project site can’t support 100% trackers. When it comes to enabling solar projects on challenging sites, developers should keep an open mind that the best solution for a job might be a combination of fixed-tilt mounting and trackers. Consider a site where 40% of the site has terrain suitable for a tracker. The rest of the site slopes at 10 to 20% grade. Often developers choose to discount the 60% of the site that is sloped or abandon the site altogether. A better alternative would be to move forward with the tracker as planned on 40% of the site and install fixed tilt on the remaining 60%. When fixed costs are high and space is constrained, the greater energy density system improves project economics.

It’s clear that distributed-drive solar trackers are being installed more often, especially as perfectly square development spaces become fewer. However, though failures are low impact, the troubling reality is that there are 10 times as many failures given the sheer number of components. Companies like SunLink are working to develop high-tech systems for more advanced tracker monitoring and dynamic product design, which will help manufacturers develop better, smarter systems and reduce O&M costs now.

Currently, monitoring distributed trackers with legacy DAS systems is a staggering challenge. As shown in Figure 1, distributed systems have three or four orders of magnitude more monitoring points than centralized systems. While a centralized tracker will have as few as 80 drives per 100 MW capacity, a distributed tracker will have more than 3,000. The same math applies to centralized, string and microinverters. In a distributed system, a simple visual inspection is a significant undertaking. Even if the system can be monitored remotely, picking through thousands of data entries to find where there are problems isn’t practical.

Knowing that the thousands of parts of an electromechanical system will fail at a certain rate, and in a time period often far shorter than the useful life of a utility-scale generating station, SunLink set out to introduce a smarter way to collect and visualize data and transform it into insightful, actionable information.

While many current data systems dutifully collect vast quantities of data, making that data easy to access and understand has eluded the industry, SunLink’s VERTEX takes a novel approach by triaging problems and suggesting the most efficient way to resolve them, making long term O&M of distributed generation more efficient and far less costly.

Dynamic design in mounting systems will enable further advances. As an example, SunLink is pioneering dynamic stabilization—a method for changing the characteristics of the tracker depending on real-time, sensor-observed environmental conditions. Beyond simply adjusting tilt, SunLink’s TechTrack Distributed incorporates control over the damping and stiffness of the array, opening a completely new solution space for increasing energy output, maintaining structural integrity and lowering cost.
All of these improvements are made possible by integrating intelligent, connected software with plant hardware. Ultimately, better data enables an innovation feedback loop that will improve mounting systems, solar plant design and project economics.