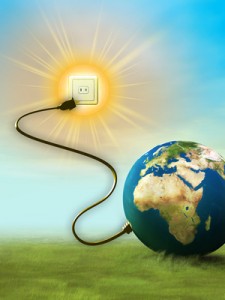 Lack of access to financing and the current regulatory framework governing renewable energy development in Kenya has hampered generation of electricity from clean sources by universities in the country despite their increasing student enrolment and high carbon footprint.Reduction of carbon dioxide and other green house emissions has been incorporated in the sustainability plans by the 17 universities that have a charter, and the 13 that have been given letters of interim authority but the institutions, which rely on power supply from the national grid, face several challenges in their attempt to embrace renewable energy sources that would help them cut down on electricity bills and improve the security of their energy supply.

Kenya National Bureau of Statistics Director General Zachary Mwangi says in the latest Economic Survey total university enrolment rose by 22.8 percent from 361,379 in 2013/14 to 443,783 in 2014/15 “mainly due to infrastructure development, introduction of new courses and opening of more satellite campuses.”“Universities and colleges have been slow at embracing renewable energy generation despite the existing potential because of several reasons, such as money being very expensive here in Kenya,” Prof. Izael Da Silva, Deputy Vice Chancellor for Research and Innovation at the Nairobi-based Strathmore University, said.

According to Da Silva, some banks charge as much as 25 percent interest on the local currency.“Unless a university lands on a green line of credit from Europe, which is currently in slow growth mode, it will not go into investing in solar because the project will never give an internal rate of return above 25 percent,” he told Renewable Energy World.

The Kenyan universities are also unable to generate financing from their operations because learning programs, which generate more than 90 percent of the institutions’ revenue, “are too cheap,” according to Da Silva.He said a four-year course in a private university could cost as little as $10,000 and “our universities’ level of research is very small and the concept of endowment fund is totally alien to us.”

Da Silva said that, for example, signing of power purchase agreements between Kenya Power Company, the state-run electricity off-taker, and a renewable energy developer “takes too long” and delays commercialization of the projects, “which discourages uptake of clean energy by interested institutions.”Strathmore University became the first institution of higher learning in Kenya in October 2015 to sign a 20-year power purchase agreement with the country’s off-taker. The university has installed a grid-tied 0.6-MW solar PV system on rooftops of its six buildings with $1.3 million financing from the French government through the Cooperative Bank of Kenya. Strathmore will sell 0.25 MW to the utility at $0.12 per a unit and meet 75 percent of its energy demand from the project.Da Silva said more European investors are now more interested in investing in renewable energy in East Africa.

“These investors can buy panels and inverters and use the roof of a client, such a university, to produce electricity and sell it to them at a tariff lower than that offered by the off-taker,” he said.He added that with the falling prices of modules and inverters and presence of some green line of credit it is possible for universities to embrace renewable energy.